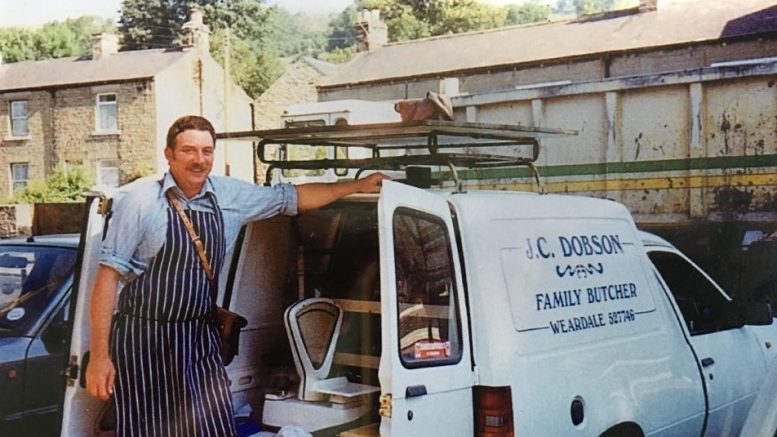 A MUCH loved Weardale institution and pillar of the community has retired from his rounds delivering butcher’s meat, marking the end of an era.

Kit Dobson has been delivering meat from his Tow Law butchers to the residents of Weardale for nearly 40 years.

Starting on March 3, 1981, with a small van knocking on doors, Mr Dobson became a vital part of Weardale life delivery meat to people in isolated places.

At the age of 69 Mr Dobson has finally called time on his rounds.

He said: “I called a meeting with the family to discuss it with them and decided that now was time.

“I would have liked to make it to 40 years, but with Covid, the lockdown and the chance of a second lockdown in winter I don’t think I would cope.

“I would like to thank all of my customers over the years, my wife, children and daughters-in-law for their help and support over the years.”

Mr Dobson was diagnosed with chronic obstructive pulmonary disease (COPD) and pneumonia and had a brief stint in hospital at Christmas, so thought it would be best to call it a day to enjoy his garden and golfing.

His round consisted of Weardale, Tow Law and Sunniside. As time went on, his customer base declined but he still kept a core of followers that he needed to deliver to.

He said: “People used to get their shovels out in winter to help me up to their farms – I never missed a delivery and I never got stuck. I even had chains on the tyres of the van at one point.

“I had such loyal customers and I would like to thank all of them. I became something of a family friend to them – I was always bringing things up the dale for them and changing light bulbs.”

His nephew, Richard Dobson, along with his old colleague Patrick Burke now run Dobson butchers shop in Tow Law, which is going strong.

Sales are up during the period of lockdown as people turned away from the supermarket because of the virus.

His wife, Margaret Dobson, said: “I’m very proud of what my husband did for his customers – walking into farms in snow delivering meat helping people, but mainly just talking to lonely people who maybe just saw him and no one else in days.

“I really think if his health was good he would have continued to work, so it’s a sad time for him.”

Mr Dobson is a keen gardener and has kept in touch with many of the people he met on his rounds.

Many of them take part in the leek growing club Mr Dobson runs at Rookhope and he hopes to keep it going.

Durham County Councillor for Weardale John Shuttleworth said: “Kit Dobson is one of the last of his kind, someone who travelled all over the Dale to serve the needs of the public, rain, hail or shine.

“This is a service which cannot be easily replaced, but I do wish Kit a happy retirement and hope playing golf is his future as I know that’s his hobby.”