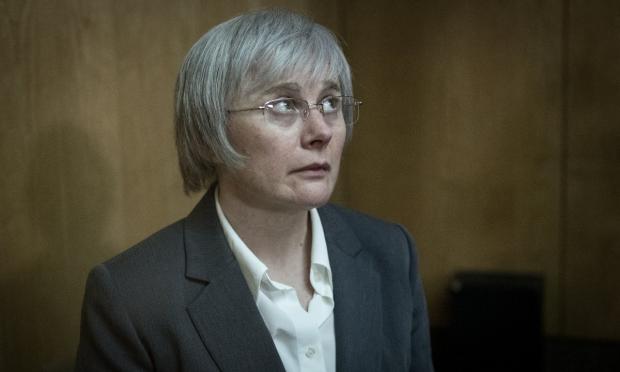 VIEWERS who did not fully know the tale of the infamous “canoe man” John Darwin and his brazen decision to fake his own death were left disgusted by the jail terms offered.

The Thief, His Wife and The Canoe came to a wrap last night after four feature-length episodes of the gritty tale on ITV and featured a dramatic ending.

The show, which stars Eddie Marsan as Darwin and Monica Dolan as wife, Anne, first aired on Sunday night and told the shocking tale of the two Hartlepool fraudsters.

But as viewers were shown scenes in the courtroom towards the end of the show, many were left disgusted and appalled by the sentences that were given back in 2008.

In the series, viewers watched on as Anne argued that she had been coerced into the whole thing by her husband, however, it was not enough to convince the jury.

Anne, was convicted of fraud as was husband, John, and was handed a six-and-a-half year jail term.

But this was three months longer than her counterpart, who came up with the idea and executed the brazen plan to fake his own death to claim life insurance money.

Read more: North East filming locations for The Thief, His Wife and the Canoe

On social media last night, one person said: “Anne Darwin got a longer sentence than John! That’s messed up.”

Another furious viewer hit out at John Darwin’s more lenient sentence and branded him an “utter creep” after his portrayal in the show.

They said: “I’ve been watching the canoe man drama. He was an utter creep and was given a shorter sentence for fraud.

“Don’t get me going on dating sites either and people getting into a mess on them. Seen both male and female friends ripped off.”

Another was left perplexed by the sentences given and said: “Why did Anne Darwin get a longer sentence than John Darwin? I am at a loss.”

However, it is widely acknowledged that Anne received a longer sentence because she attempted to plead not guilty, while John Darwin admitted his error and pleaded guilty.

But others argued that Anne “deserved” her term, saying that she had told more lies than husband, John throughout the process.

In reports, real-life Anne said she felt she deserved to be punished for her part in the plan, but admitted she had been taken by surprise by the length of sentencing.

She said: “I was given no indication that the sentence would be that long. It came as a shock.”

She went on to say: “Yes, I committed the crime and I deserved to be punished. I wasn’t prepared for that at all.”

Although the four-part series has concluded, a further episode in the form of a documentary – The Thief, His Wife and the Canoe: The Real Story will air on ITV at 9pm tonight (April 21).