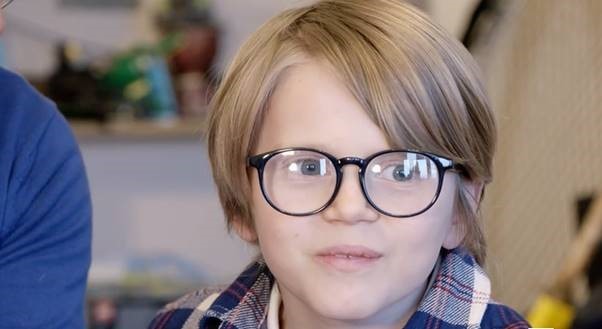 A DAD has spoken of the horrific moment he feared he had blinded his young son after mistakenly putting super glue in his eye.

Nine-year-old Rupert Day from Thirsk sustained a nasty eye injury in February caused by grit in his eyeball.

Read more: Sutton Bank is closed by police after lorry sheds its load

He had been on eye drops for two days when his dad Kevin accidentally picked up super glue instead of the drops when giving him his treatment.

Thankfully Yorkshire Air Ambulance paramedics were soon on the scene to get Rupert the urgent attention he needed.

He said: “Rupert scratched his eye a few days ago and we were given some eye cream.

“I went to put it in and then realised I had put super glue in his eye instead.

“I phoned 999 who advised us to keep flushing it and they said an ambulance was on its way.

“I wasn’t expecting the air ambulance.”

Due to the close proximity of their airbase to the the Day’s Thirsk home, Yorkshire Air Ambulance dispatched their Topcliffe aircraft and were first on scene.

Their paramedics bathed Rupert’s eye and administered pain relief until the land ambulance was able to take him to Harrogate Hospital for further treatment.

Kevin said: “I had a massive fear that I had blinded my son and ruined his life.”

Speaking of the incident, Rupert said: “I was worried if my eye would open again.”

Rupert spent a few hours in the hospital and couldn’t open his eye for four days.

But thankfully no glue had gone into his eye and his vision has been completely fine following his traumatic ordeal.

The episode of Helicopter ER featuring the family will air on Channel Really at 10pm on Tuesday, November 2.

It also features a cardiac arrest in Ilkley and a DIY incident in South Yorkshire.

The show highlights the work of the Yorkshire Air Ambulance which serves 5 million people across Yorkshire and carries out over 1,300 missions every year.

The charity operates two Airbus H145 helicopters and needs to raise £12,000 every day.

The helicopters are based at RAF Topcliffe near Thirsk and Nostell Priory near Wakefield.

You can also follow our dedicated North Yorkshire Facebook page for all the latest in the area by clicking here.