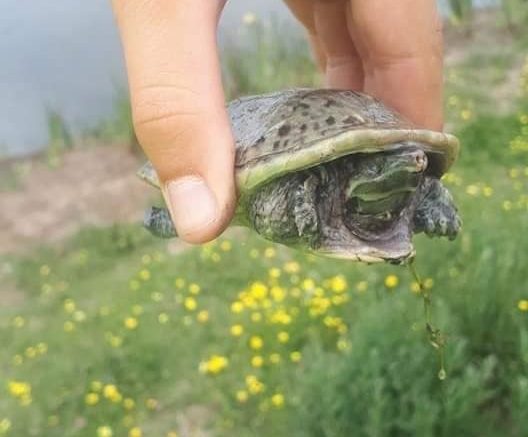 THE RSPCA have spoken out about releasing exotic animals into the wild after a family pet went missing after its owner could not look after it anymore.

Timmy the Terrapin had been missing for over three weeks. Nicola Parker wanted to find the terrapin, which used to be owned by her animal loving sister who passed away in October.

He released into ponds around Oakenshaw, near Willington, after his new owners were unable to care for him. Mrs Parker said she believed it was done without malice.

The terrapin was found by a anonymous walker, who took it to the local RSPCA at Willington on June 11. However, Timmy sadly passed away after attempts were made to give him some warmth and comfort.

Mrs Parker said: “I was told they found Timmy but he wasn’t very well so he was taken to someone that works in the RSPCA. They tried to warm him up, but it was too late and he died – which I’m obviously gutted about.

“At least I know what happened to him. Shame it wasn’t a better outcome.”

An RSPCA spokesperson said: “Terrapins and turtles need to be cared for properly in a set-up that mimics their natural environment as much as possible. Reptiles appear to have increased in popularity as pets and sadly, as their popularity increases so does the number of calls, we receive about them.

“As a result of the number of unwanted pet terrapins that have been released into our waterways, pond sliders are now considered ‘invasive alien species’ under the Invasive Alien Species (Enforcement and Permitting) Order 2019. There are strict restrictions on the sale, breeding, keeping and transportation of these terrapins due to the potential danger they pose, as non-native species, to the natural environment.

”Most exotic animals kept as pets are unlikely to be able to survive in the wild in Britain and non-native species could pose a serious threat to our native wildlife.”

Mrs Parker would like to thank everyone who tried to find Timmy.