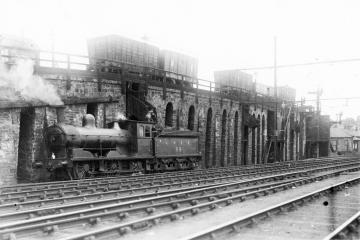 Chris Lloyd looks at Historic England’s new report about the ground-breaking significance of the 175-year-old “coal drops” beside the Stockton & Darlington Railway.

FASCINATING new research into a famous piece of County Durham’s industrial history has revealed that it was the first attempt in the world to speed up a notoriously slow part of the operation of the railways.

The remains of the 175-year-old “coal drops” at Shildon with their tall stone arches and graceful slope, have long tantalised, but now Historic England believes its researchers have bottomed out their history.

The drops, which are now in the grounds of the Locomotion museum, were built by the Stockton & Darlington Railway in 1847.

“We have clarified when the coal drops were built, who designed them and how they operated. Our research has also suggested they probably represent the first attempt, in Britain – and given Britain’s primacy in the development of railways, possibly the world – to mechanise the process of re-fuelling steam locomotives.”

Reconstruction drawing of the hopper/chute mechanism, based on historic photographs, by Allan Adams of Historic England

Before this breakthrough, refuelling was a labour-intensive and time-consuming process, involving men shovelling coal by hand into an engine’s tender – the wagon immediately behind the locomotive that contains its fuel.

But John Graham, the S&DR’s Traffic Manager, built the drops to use gravity to speed up, and so reduce the cost, of the process.

Special coal wagons with bottom-opening doors were run up the ramp of the drops. At the top, the doors of the wagons were opened and the loads were discharged by gravity into wooden hoppers which were beneath the rails.

On the ground, a locomotive in need of coal would then approach the drops using a short loop of railway line known as a ‘coaling road’.

Once the loco was in place, a chute on the hoppers would be lowered and so the coal would fall – under gravity – into the tender.

As Shildon was the hub for the distribution of coal mined in Durham – Shildon boasted the world’s largest marshalling yards – there many locos which needed to be filled every day to take the black gold to market.

The drops opened in early 1847 and remained in use until 1935 following a reduction in the number of coal trains operating out of Shildon. They are now Grade II* because of their historical significance.

LNER Sentinel railcar coaling at the drops sometime between 1932and 1935. Picture from the Ken Hoole Collection at Darlington’s Head of Steam museum

Historic England carried out the study of the coal drops as part of its research into the history of Shildon, which is known as the cradle of the railway. This research is part of the Stockton and Darlington Railway Heritage Action Zone (HAZ), a five-year programme established to help rejuvenate and restore the 26-mile stretch of historic railway ahead of its 200th anniversary in 2025.

If you want to read more great stories, why not subscribe to your Northern Echo for as little as £1.25 a week. Click here

Sarah Price, head of the Locomotion museum, said: “The coal drops are an important part of Locomotion’s collection of historically significant railway buildings and structures. This research will increase public interest at a time of significant investment at Locomotion that will see improvements to the condition of the coal drops as well as the creation of a new collection building, ‘New Hall’, in November 2023.”

The drops are owned by Durham County Council, and Cllr Elizabeth Scott, the council’s cabinet member for economy and partnerships, said: “In recognition of the coal drops’ significance, we are pleased to be working with partners to support a restoration scheme for the structure using the Levelling Up funding we secured to help build on Shildon’s status as the world’s first railway town, with the engineering pedigree that gave birth to the world’s first passenger railway.

“With the New Hall development also set to open next year and the bicentenary celebrations of the Stockton and Darlington Railway in 2025, these really are exciting times for the site.”