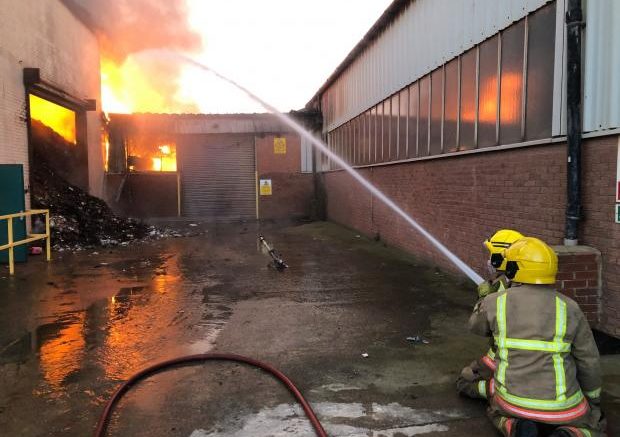 FIRE rescue crews are still on site tackling a large-scale waste fire which could continue to burn for days, residents have been warned.

County Durham and Darlington Fire and Rescue Service are still in attendance at the Eldon area of Bishop Auckland, where approximately 4,000 tonnes of waste is on fire.

Multiple crews and senior officers have attended the incident since it was first reported early yesterday morning.

The service currently has three fire engines on scene – one from Bishop Auckland, one from Spennymoor and one from Peterlee fire stations, who are working together to control the fire.

Graeme Metcalf, group manager currently in attendance at the scene, said: “We are working with our partners from the Environment Agency, Durham County Council and Durham Constabulary to effectively manage the scene.

“The plan is to begin to carry out a controlled burn of the site by separating the waste into smaller piles to extinguish the fire as quickly as possible.

“However, due to the extremely large amount of waste involved, this is expected to continue for a considerable amount of time.

“Thanks to our crews and our colleagues from our partner agencies who have been working hard to manage the incident so far, and who will continue to do so for the remainder of the week.

“We would continue to advise residents living in the area to keep their windows and doors closed”.

Crews from across the county were called out to the former Eldon Brickworks site early on Monday morning.

Residents were warned to close their windows as the unknown materials burning could be potentially hazardous.

Smoke filled the sky and could be seen from miles away, even reaching the A1.

Due to the volume and unknown nature of the waste, firefighters are using a controlled burn to tackle the fire in a bid to reduce the pollution from the fire.

A Durham Police spokesperson said: “We were called by County Durham and Darlington Fire and Rescue Service to reports of a large fire at Eldon Brickworks at around 5.15am on Monday, August 31.

“A multi-agency operation led by the fire service and the Environment Agency has been launched to deal with the fire which is expected to burn for several days.”

At this time, the cause of the fire is unknown.