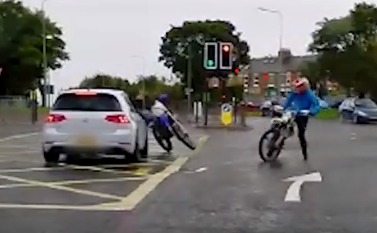 POLICE are appealing for information after an off-road bike crashed into a car last weekend.

The collision took place on the A167 at Neville’s Cross in County Durham, at around 12.45pm on Sunday, September 6.

A group of seven bikes are believed to have ridden through a red light onto the box junction, resulting in one of the riders colliding with a white Volkswagen Golf.

Dashcam footage of the incident shows the crashed rider – on a blue and white bike – flee the scene.

Witnesses reported that the group headed south on the A167 towards the Duke of Wellington.

Officers investigating the crash are keen to identify any of the riders involved, and have released dashcam footage included with this article.

To offer information relating to the incident or to identify any of the riders shown in the footage, call Durham Police on 101, quoting incident number 167 of September 6.