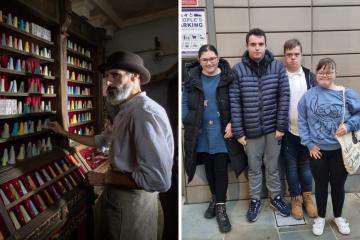 A mother who had planned to bring a group of adults with disabilities to a popular York shop during Ghost Week says they were left in tears after the trip was cancelled at the eleventh hour.

Sheena Shackleton said she spoke to staff at York Ghost Merchants in Shambles in the Summer time to arrange to bring her 18-year-old son, Daniel, who has Down’s Syndrome, and a group of friends across to York during the October half term.

She said she had to plan the trip well in advance as she knew half term would be popular and the group do not understand queuing.

So as to avoid disappointment, Sheena said she had several emails and phone calls with the shop and was told that they could come at either the start or the end of the day so as to avoid the lengthy queues.

But on the morning, just as they were getting ready to leave Bradford, Sheena said she received a short email from the shop saying they were having to cancel because they were ‘very busy’, but with no attempt to arrange an alternative, and despite repeated phone calls to the shop, she couldn’t get through to speak to anyone.

The shop has since apologised and promised to investigate what went wrong.

“It was just awful,” said Sheena, from Sandy Lane.

“They have all been looking forward to this for months. They have seen York Ghost Merchants on TikTok and absolutely love them and it’s all they have been asking for ever since.

“All we wanted was a very quick visit so they could buy some ghosts and, because they don’t understand queueing, it had all had to be arranged way ahead of time.

“To find out just as we were setting off left them in tears.

“Trying to explain that we couldn’t go after so long was just so disappointing.

“I get that they are extremely busy, but we have been waiting for months and they were all really really excited – it was something spooky and special to do with them at half term.”

“York Ghost Week is one the busiest periods of the year and we would not have been able to offer the best possible experience. We understand that many people, including those with hidden disabilities, are not comfortable queuing or in busy or crowded spaces and as such, we try our best to accommodate visitors at different times of the day.

“We are investigating this case in more detail and will be in touch with Ms Shackleton to try to organise another visit at a time to suit her and her group.

“For us it is about delivering as perfect an experience as possible, and we thank everyone who has visited our shop and taken part in York Ghost Week activities across the city this year, the event is fast becoming a seasonal staple in York’s festival calendar.”

Ghost Week is organised by York Ghost Merchants and runs until Sunday (October 30) with people invited to the search each evening at dusk for the Little York Ghosts which hide on the streets that flank the Minster. There are 125 to find every night and the event is extremely popular.