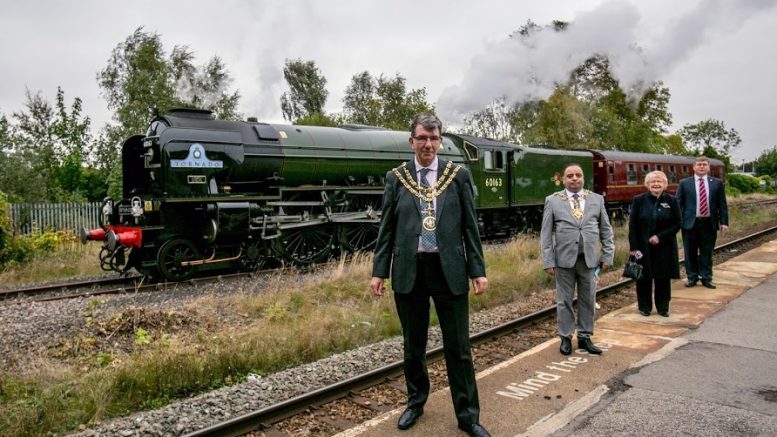 THE UK’s newest mainline steam train crossed the Tees Valley yesterday to revisit the route of the first steam locomotive to run on a public railway exactly 195 years ago.

Locomotion No. 1 made its inaugural journey on September 27, 1825, transporting both coal and passengers between Shildon and Stockton.

Tornado, built in Darlington in 2008, made a celebratory journey to launch the countdown to the 200th birthday of the Stockton and Darlington Railway and the town’s plans for its Rail Heritage Quarter.

Commissioned for the journey by A1 Steam Locomotive Trust, the train began its ceremonial tour in Middlesbrough, proceeding through Stockton and over the Skerne Bridge in Darlington, which featured alongside Locomotion No. 1 on the £5 note between 1990 and 2002.

Tornado paused at Skerne Bridge and then continued to Darlington’s North Road station, the home of the town’s Head of Steam railway museum.

Mayor of Darlington, Councillor Chris McEwan, and the Mayor of Stockton, Councillor Mohammed Javed, started the countdown clock at the Head of Steam. Mr McEwan also launched a virtual event which formalised Darlington’s partnership with other major railway towns and cities around the world, which will take place in early 2021.

Mr McEwan said: “The 195th anniversary of the Stockton and Darlington Railway, and the countdown to the bicentenary, is a once-in-a-generation occasion for the whole of Darlington and the Tees Valley. Covid-19 has meant we can’t celebrate with as many stakeholders and residents as we would have liked, but while we’ve had to scale back our birthday party, the pandemic has had no impact on the scope of our ambitious plans for 2024 and beyond.

“Tornado is here to help us, in a Covid safe way, celebrate the 195th anniversary of the Stockton to Darlington Railway. What we’re going to be doing today, in a Covid safe way, is launching a countdown to five years from now, where we’ll be celebrating 200 years since Darlington, Stockton, South Durham did something transformational for the world and that was the first passenger steam rail train in the world. Nobody can deny that rail travel has not had a transformational impact on the world and it started here, 195 years ago, and I think that is something to celebrate.”

A major capital project has been launched with a £20 million investment from the Tees Valley Mayor and Combined Authority which will transform the Head of Steam into a major visitor attraction and museum, due to open in 2024 so that it can be a central part of the bicentenary celebrations.

Mr McEwan added: “It’s fit and proper that we mark this day and also start the clock for five years time. But it’s also an opportunity for investment, employment, tourism opportunities – there will be cynics who say who wants to come to Darlington or Tees Valley or South Durham, actually we have a lot to offer and as we move forward it’s not just the actual week of the 200th anniversary but there will be a number of things that will be left as a legacy for the people of Tees Valley.”

As well as essential improvements to a number of historic buildings on the site, there will be a major exhibition programme, a new immersive ride experience, café and shop, themed play area, and a new Live Engineering building, along with extended car parking spaces. The Rail Heritage Quarter will attract local, national and international visitors and create local employment and business opportunities.

“It’s absolutely fantastic and to get Tornado here to help to celebrate is the icing on the cake and we do have to thank the A1 trust for organising all of this. Obviously this is helping us to launch our campaign to keep Locomotion No. 1 here, it’s very important that we keep this campaign up.

“We’re just encouraging everybody to get involved. We don’t understand why the science museum wants to take it away from us, we’ve looked after it for all this time we’ve had no funding or anything to help us.”

Councillor Mohammed Javed, Mayor of Stockton-on-Tees, said: “It’s wonderful to see Stockton and Darlington coming together to celebrate this historic occasion, and to have the world-famous Tornado travel through our Borough to mark the occasion was very fitting. It’s a marvellous feat of engineering and a perfect way of starting the clock as we count down to 2025.”