THE department store fined £17,000 after ignoring lockdown rules can be revealed as TJ Hughes in Middlesbrough.

The store was issued with several FPNs and a prohibition notice by Middlesbrough Council for failing to close as required under Covid-19 regulations.

The council hasn’t confirmed which store has closed but the Northern Echo now undertsands it is TJ Hughes.

On Facebook yesterday the store said: “We have voluntarily made the decision to close the store until further decisions are made. We will be back with some fantastic offers very soon to share with you.”

The business is understood to have now complied with the notices and will no longer trade while the restrictions are in place. It’s understood local authorities in other areas of the country are also pursuing enforcement action against the company.

Although the businesses concerned are permitted to operate collection services, they were observed selling directly from their premises.

Head of Public Protection Judith Hedgley said: “We have found a number of shops trading which are not essential retailers. In some cases they have tried to get around the restrictions by selling or claiming to sell a small amount of food, medicines or items that are actually essential.

“Some shops have even started to sell such items like face coverings then claiming they are essential on this basis. The laws are in place to prevent the spread of Covid-19. Middlesbrough’s infection rate is among the highest in the country. We must all follow the restrictions to stop the spread.”

Middlesbrough Mayor Andy Preston said: “Our town needs as short a period of lockdown as possible. The longer restrictions are in place the more damage they will cause. This is about protecting public health and also people’s livelihoods and futures.

“To everyone who is doing the right thing – thank you. To anyone ignoring the rules please think about the impact your actions have on Middlesbrough. Council officers won’t hesitate to take enforcement action.”

Under the current restrictions only essential retail such as food shops, supermarkets, pharmacies, hardware stores and off-licences should be open, together with other permitted retail such as garden centres.

Non-essential retail, such as clothing and homeware stores and shops selling electronic goods and mobile phones should be closed other than for click-and-collect.

Middlesbrough Council declined to comment on the name of the department store. 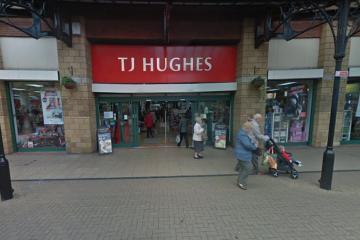