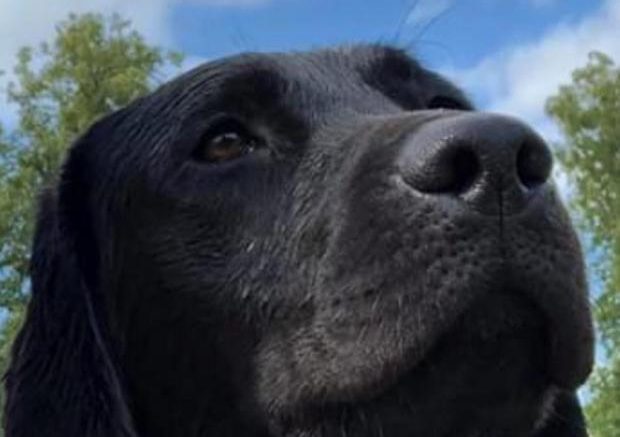 A HEARTBROKEN family searching for their beloved black Labrador Roxy after she went missing at a popular Teesdale beauty spot a week ago have been overwhelmed by the support of the community which has rallied to help.

Shepherds, walkers, gamekeepers, landlords, farmers and even kayakers have been helping scour the river banks and area surrounding Low Force as the Ford family remain confident she is still out there – and are offering a substantial reward for information leading to the safe return of the two-year-old.

Sam Ford said: “It is heart-breaking for us not knowing where she is, but the response to her disappearance fills us with hope knowing that so many people in the area are looking out for her.

“My husband James, our four children Jack, Ruby, Alfie and Nancy and our two black labradors Beau and Roxy arrived at Bowlees visitor centre to go for a walk to see the waterfall and have a picnic last Monday.

“It was around 10.30am just past the stone sheep monument at Low Force where we lost Roxy. My husband and I were concentrating on the children and getting them round the corner safely, knowing the dogs never venture far from us. As we got to the grassed area at the top of low force it was then we realised Roxy was missing. She had been with us at the stone sheep monument.”

The family retrace their steps and spent the rest of the day scouring the area looking for Roxy. but to no avail.

Members of staff at Bowlees Visitor Centre where the staff put a post on Facebook and made posters for the area.

The following day a group searched the water near Low Force, and continued walked the paths from Low Force to High Force and Low Force to Middleton.

Sam said: “We left James’s jacket and some dog food at the missing area hoping she’d return by morning. We have continued searching ever since. Facebook has been a great way to reach out to as many people as we could.”

Mandy Butler and Rita Humphries of the Lost Dog Tracking Team arranged for thermal imaging drone to fly in areas where possible sightings have been made, while member of the Doglost were out with their drone. Wildlife cameras have also been used.

Sam said: “On Thursday three volunteers, Chris and Colleen Moss and Lizzie Harrington, carried out a water level search from Low force to Middleton in their kayaks and canoe to rule out if she had got into difficulty. Again, nothing was found. They are planning on returning on Monday if we have no more news to search further down stream.”

She added: “We have had strangers ringing and texting for updates, asking if they can help and where would be useful to walk. People I had spoke to on Monday have returned to the area later in the week specifically to look for Roxy.

“I got a call at 11pm one night from a delivery driver who was asking permission to take a poster down and put it in his van,

“I’ve spoken to window cleaners, post men, game keepers, fishermen, landlords, farmers and so many more all of which have given me advise on who else I can contact or have reassured me that they would contact me if they saw anything.

“A group of 12 from Cumbria’s missing persons and animals searched the fells on Saturday, unfortunately with no luck.

“We have had some reassuring messages of people who have lost there dogs in the past and have returned weeks later. Which is comforting to know. We haven’t lost hope and just want her home.”