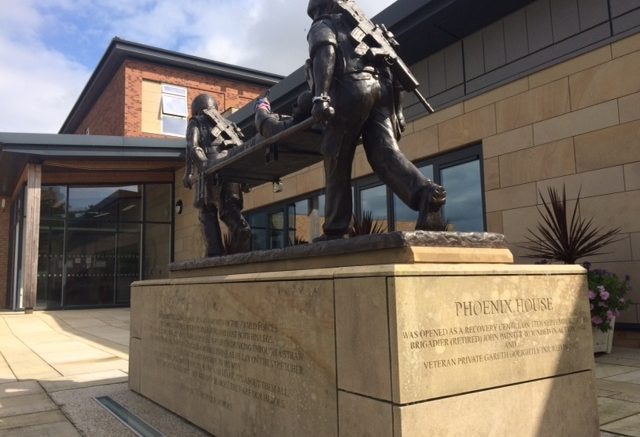 A CHARITY which is vital in the rehabilitation of wounded and sick soldiers and veterans has announced its recovery centres will close.

Help for Heroes has today announced a major restructure in order to protect its recovery services from the devastating financial impact of the Covid-19 pandemic.

The closure of the recovery centres will result in 142 job losses, including a number at Phoenix House in Catterick Garrison.

Over recent months the military charity, which relies on public donations for 97 per cent of income, has suffered hugely from a loss of income with all planned face-to-face fundraising events and activities since April either cancelled or postponed.

The charity, which provides recovery support to the wounded, injured and sick Armed Forces community, anticipates a 30 per cent reduction in regular income over the coming years with the ongoing economic recession.

This financial hit, coupled with a significant surge in demand for its recovery services during the height of the pandemic, meant the charity felt it had no choice but to review its service delivery and put 142 staff roles are at risk.

The charity will continue to focus on face to face community and digital services and will not be operating out of Phoenix House Recovery Centre in Catterick Garrison for the foreseeable future.

The charity believes moving towards a more community and digital-focused approach to delivering support will mean the charity can most effectively reach the wounded veterans and families that need support, regardless of their location, in a more cost-effective way.

Veteran on the Parachute Regiment, Jimmy Holborn, from Sunderland, has experienced the power of Phoenix House first hand, after recovered from the physical and mental effects of two parachuting accidents and serving in Iraq.

He said: “The thing that worries me most is the veterans. I benefitted massively from going into Phoenix House and I know so many others that do too.

“As well as the big events you can get involved in, like the Warrior Games, the most important part of what the centre offered was the sense of community.

“You could go to the centre from Monday to Friday and sit next to other veterans and talk about anything and everything. You feel normal in the company of other veterans – for a veteran, that is the only time you do feel normal.

“For respite it was like an amazing hotel; for courses it had the best classrooms; and the mental health facilities were all behind closed doors so you felt safe in your therapy sessions to say what you needed to say.

“You can also feel very tired and upset after a session, so it was good to be able to have a cup of tea and chat with someone else before you went home.

“At one point, I would never have been able to speak on the phone for my therapy, so I do worry about veterans currently needing the service.”

Mr Holborn is organising his own version of the Highland Games for veterans, for information search Wounded Highlanders on Facebook or Instagram.

Melanie Waters, CEO, said the decision was extremely tough but the charity had a responsibility to ensure that the lifelong support promised to the men and women who suffered life-changing injuries or illnesses as a result of their service could continue against the backdrop of the pandemic.

She said: “In 2007, we made a promise on behalf of the nation to provide lifetime support to wounded veterans, and their families, and we are striving to keep that promise.“The crisis has had a devastating impact on the whole UK charity sector, with lasting consequences, and it has hit us hard.We expect these changes to have a positive impact on our ability to protect our services and support for the long term, which is incredibly important.We are not stopping any services but will be providing the same first-class recovery services in a more cost-effective way.”

“The continued Covid-19 restrictions mean that wounded veterans have a greater need for support to be available closer to home, in their communities and online.

“We remain absolutely committed to our wounded and their families and will continue fighting for, and changing the lives of, those we support for as long as they need it.”

Help for Heroes was quick to adapt its support in March, despite having to furlough nearly 40 per cent of its staff for up to seven months, and has continued to deliver virtual and remote support through its fellowship, welfare, clinical, grants and psychological wellbeing services ever since.The charity is working closely with MoD to ensure that all centres continue to provide core recovery activities for wounded, injured or sick service personnel during lockdown and beyond.

Veteran and Help for Heroes Ambassador Rob Shenton added: “Help for Heroes Recovery Centres are based in military communities, but the veteran community is spread much wider than those centres.

“These changes will mean the charity can have a deeper reach to where veterans need the most help. Help for Heroes are my fourth emergency service in some respects. They started providing support when most thought it was not needed and the systems couldn’t cope. The truth was it was so desperately needed and still is to this day and beyond. These changes will help the charity continue to provide that support to veterans like me in the future.”

Former editor of The Northern Echo, Peter Barron, spearheaded a campaign to raise £100,000 for the recovery centre, originally designed to fund a performing arts centre for veterans.

He said: “It was a privilege to host events at Phoenix House, including the fashion show which was an amazing showcase, not just of the facility but also the spirit of the people there.

Demand for support rose significantly during lockdown with a 33 per cent increase in new people coming forward for support with their mental health in May and June 2020 compared to the same period last year, as well as nearly 30 per cent more new referrals into the charity’s physical health focused service.

To donate and give much needed support helpforheroes.org.uk/donate-online.