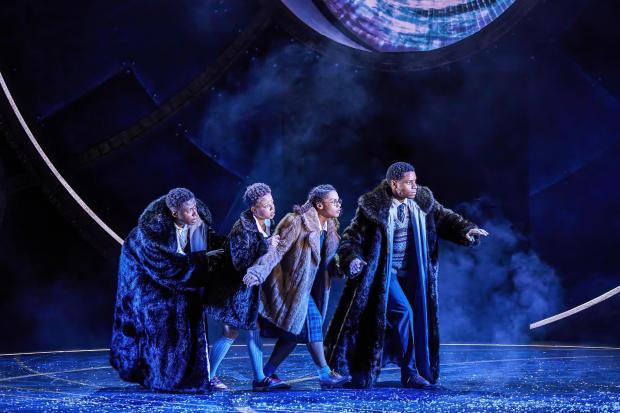 THE land where it is always winter, but never Christmas is brought to life in this impressive production of puppets, sinister creatures and a dancing band.

The Lion, the Witch and the Wardrobe is on show at Sunderland’s Empire Theatre until Saturday.

CS Lewis’s much loved children’s tale, which had its opening night on Tuesday, is brought to the stage by Elliott and Harper Productions.

With its falling snow, strange Santa and fur-clad white witch, it’s just the thing to get you in the mood for Christmas.

Chasing through the house, they soon stumble through the wardrobe to Narnia and clad in their frumpy evacuees outfits and fur coats they join forces with some Resistance Beavers before meeting Aslan (Chris Jared), freeing everyone’s favourite faun Mr Tumnus (Jez Unwin) and defeating the White Witch (Samantha Womack).

The elements of masks and puppetry are among the highlights of some complex staging which helps bring the more magical elements to life.

In an enchanting bit of puppetry, Aslan, the lion at the moral centre of the story, is recreated in aluminium and wood, who accompanies Jared on stage. His puppeteers manage to breathe both life and a little magic into the beautifully crafted lion.

Other highlights are the witch’s strange and creepy minions with their sinister masks which genuinely strike a note of fear and some of the other animals recreated on stage.

Most of the elements work well and there is plenty of clever staging, from the suitcase train steaming the children away from the Blitz to a dancing figure made from blocks of lurid Turkish Delight which tempt Edmund away from his brother and sisters.

There is a whole background cast of dancers and musicians which help create a sometimes ethereal and sometimes folksy atmosphere.

I wasn’t quite sure about the embodiment of snow and ice when Lucy takes her first steps into Narnia, but by the time they hit the second act, the various creatures they create are brilliant, in particular the witch’s wolves which have a foreboding realism to them.

The production team also makes use of aerial techniques, which provides the standout moment of the first act – the White Witch as she takes to the skies with her silvery skirts in full flow.

West End and Eastenders actress Samantha Womack, who returns to the theatre after recent success as the lead role of The Girl on the Train, gives a star turn as the witch.

And almost as good is her wardrobe, from her dramatic fur cape to silvery dresses and a blood-trimmed robe.

The show, based on the original production by Sally Cookson, manages to stay true to the book and does much to recreate the Narnia of a child’s imagination.