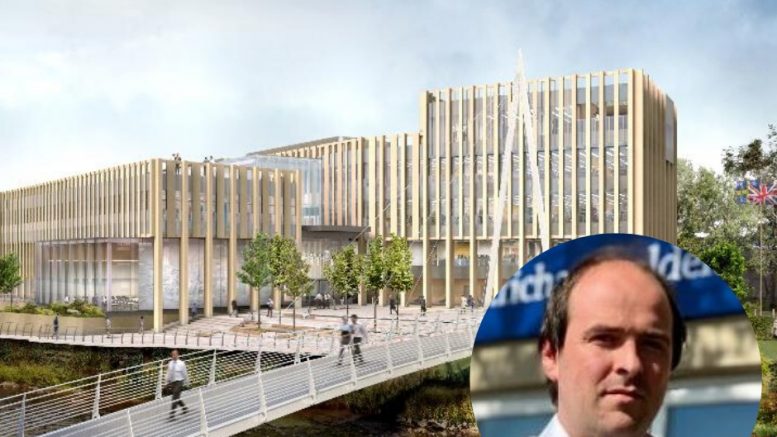 A COUNCIL has been accused of ‘squirrelling away’ taxpayer’s cash for a ‘vanity project’ to create its new headquarters on a flood plain.

Richard Holden, Conservative MP for North-West Durham, issued the broadside against Durham County Council over its new offices in the heart of the city.

But the authority’s Labour leader has responded, claiming the MP’s press release contained factual errors and accused him of trying to make political gain from the issue.

Work on the new base for Durham County Council, started in August, and will be a third of the size of the current County Hall.

The council is moving from Aykley Heads, as part of plans to create a multi-million businesses district there creating thousands of jobs and delivering a £400 million boost to the county.

Mr Holden said he was concerned about whether it is a good use of taxpayers’ money as the new HQ will cost tens of millions of pounds and the council has underused space in Crook, which is part of his constituency.

Earlier this year, following heavy rainfall, the new council offices site was affected by flood water from the River Wear.

Mr Holden said: “I find it unbelievable that Labour-led Durham County Council has been squirrelling away money for years into an “Office Accommodation Capital Reserve” fund for their new County Hall on a floodplain in the centre of Durham while simultaneously reducing local services.

“I am extremely concerned over how much taxpayers’ money is being squandered on this new building is costing when the council already have underused office space in Crook and elsewhere.

“The council also has tens of millions in reserves, their financial policies are not working and are not being used for the benefit of the community and the local area.

“What our community needs is investment in local services, town centres and the local economy, not a new £50m+ vanity project HQ on a floodplain from Labour administration who’ve been in power for over 100 years and have totally lost touch with the people they’re meant to be serving.”

Following a budget meeting earlier this year the council said it would have to manage significant financial pressures for the foreseeable future as a result of austerity measures imposed by successive Conservative Governments over the past ten years.

The authority said funding reductions, pressures on social care and other services coupled with uncertainty about future meant the financial position ‘is set to remain challenging for some time to come’.

Mr Holden and Councillor Simon Henig, the council leader, clashed more recently over the way funding to help councils deal with the coronavirus crisis is calculated.

Cllr Henig said staff were being relocated to Durham City as well as offices in Spennymoor, Crook and Seaham, which will ‘increase trade and boost the economy in our town centres’.

He added: “I would have hoped that Mr Holden would be supportive of this jobs and economy boosting initiative.

“The majority of the new headquarters is being financed through the Office Accommodation Capital Reserve as part of the capital budget, details of which have been set out in publicly available information since 2018.

“This is a budget allocated to maintaining or creating assets that will be beneficial to the county for years to come.

“In the case of the headquarters, the construction and running costs will be much lower than the cost of the repairs and ongoing maintenance required at County Hall whilst annual operating savings will also be achieved.

“The facility will be also open for weddings, conferences, meetings and use by the general public throughout the year.

“The headquarters planning application was supported by the Environment Agency after being assessed for factors including flooding mitigation.

“Despite these measures yet to be in place at the time, the building would still not have been affected by the flooding experienced in Durham City in February, as the ground floor will be several metres higher than the level the waters reached and is at a similar height to where the Government’s passport office service is located.

“Mr Holden is clearly wanting to make a political issue of this development but our aim is to focus on creating jobs and doing everything we can to boost our economy which is more critical than ever at the current time.”