A PHOTOGRAPHER managed to capture a stunning image of a couple kissing on Roseberry Topping in front of the moon.

Last night (Friday) Steven McDonald, from Middlesbrough, who mainly specialises in wedding photography, snapped the moon and by chance caught a couple kissing at the top of Roseberry Topping.

The photograph was taken at exactly 5.25pm, after Steven bought a special lense to capture the moon.

He said: “I hadn’t planned on people to be on top.”

The photo has now gone viral on social media with over 3.5k likes on Steven’s Instagram, his handle is: @stevenmcdonald_photography.

“I didn’t expect it to hit the news, I just wanted something fresh for social media.”

Steven has been appealing for the couple to come forward.

He said: “If I found the couple I’d give them a copy.

“People have been saying it’s fake, but it’s clearly not.”

The photograph was taken just outside of Great Ayton. 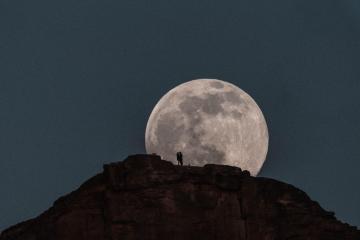 A MAN in his 50s needed hospital treatment for head injuries after a fight on Stockton High Street. The Northern Echo | Teesside …

A NORTH EAST hotel has announced its plans to reopen its restaurant after a temporary closure due to staff self-isolating from Covid. The Northern Echo | Teesside …

REDCAR has been named the highest area in England for Covid infection rates. The Northern Echo | Teesside …

TWO teenagers were injured after being stabbed in a popular North-East park yesterday evening, police have confirmed. The Northern Echo | Teesside …

THE North East and North Yorkshire are recording their highest rate of new Covid-19 cases since comparable figures began in summer 2020, when mass testing was first introduced across the UK. The Northern Echo | Teesside …