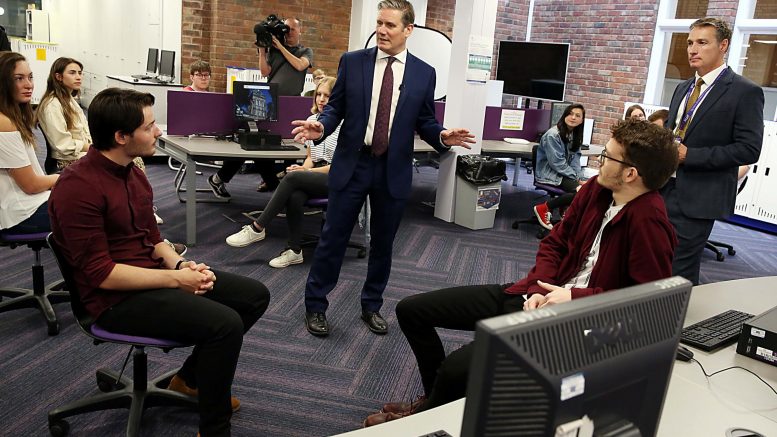 WHEN the leader of the Labour party, Sir Keir Starmer, visited Queen Elizabeth College in Darlington on A-level results day, he told staff and students: “The system has fundamentally failed you.”

Although many students at the sixth form college did exceptionally well and received top grades – many others had results that were far lower than their teachers’ predicted grades, and some even lower than mock grades.

Sir Keir listened to students who told him how the system to award grades by algorithm had impacted on them.

He said: “Results for young people are so important and something has gone horribly wrong.

“40 per cent of students have had their results down-marked, so that’s thousands of individuals whose opportunities may be dashed by this. Students are upset, frustrated and angry about the injustice.

“But, on top of that, there’s now an increasing number of colleges including here, that say it’s not even worked on its own terms. If you look at the last three or four years, this cohort is worse than the years before. It is a disaster.”

The Government needs to say what it is going to do about it.

“There needs to be a u-turn, as there was in Scotland; appeals for individual students; and fees for appeals waived for students.

“Students are feeling very disappointed and frustrated if they have missed out on university places – they haven’t had the chance to prove themselves and ultimately, the system has failed them.

“It is a terrible injustice and Labour will fight the corner of students who have suffered. The Government must recognise it has got this wrong, and we will speak up on students’ behalf.”

Sir Keir, after speaking to a student who missed out on university place at Cambridge because he missed out on an A* he was confident he could have achieved, added: “I will remember the young man who described to me that he was on for the grades he needed to achieve, and had been tracking his own progress so he was absolutely sure he could get the tops marks.

“He was working as hard as he could but was down graded by the system and has subsequently lost his opportunity to go to the university of his choice.

“This is a very hard thing to take – losing an opportunity because of an algorithm.

“Young people and their families will understand that emotion, to be downgraded through no fault of your own.

“The problem of how you work out results without exams is tough – but the Government has not done enough. They can’t just say it is bad luck.”

Sir Keir also spoke about his aims as leader of the Labour party, and added that listening to people in the North East was one of his top priorities.

He said: “It’s very important that I’m here, and I’m very pleased to be back in Darlington and am looking forward to showing people that the Labour party can be a force for good. This starts by listening to people.”