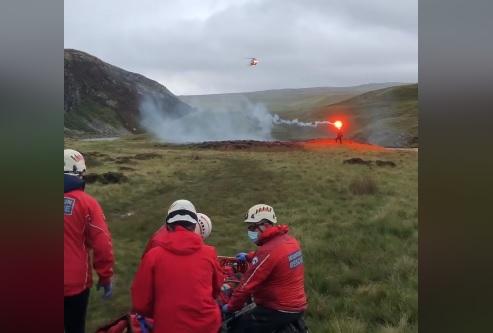 A WOMAN had to be carried off the side of a waterfall by mountain rescue volunteers before being airlifted to hospital after she fell whilst out walking.

The woman suffered multiple injuries when she tumbled on The Pennine Way path next to Cauldron Snout – a dramatic waterfall on the River Tees, near Cow Green Reservoir, in Teesdale.

The alarm was raised just after 5pm yesterday, Tuesday, August 18, and The Teesdale and Weardale Search and Mountain Rescue Team was called to the scene.

The injured walker, who was on holiday in the area with her partner, was assessed by volunteers and treated by a team medic before being stretchered off the rocks.

Due to the nature of the terrain and severity of her injuries, a Coastguard search and rescue helicopter was called to airlift the casualty to a major trauma unit for further treatment.

Scott Bisset, of The Teesdale and Weardale Search and Mountain Rescue Team, which had a total of 21 members at the scene, said: “The operation to locate, assess, treat and evacuate the casualty took almost four hours, this only 24 hours after the team had completed a search lower down the Tees for a young man missing after entering the water.”