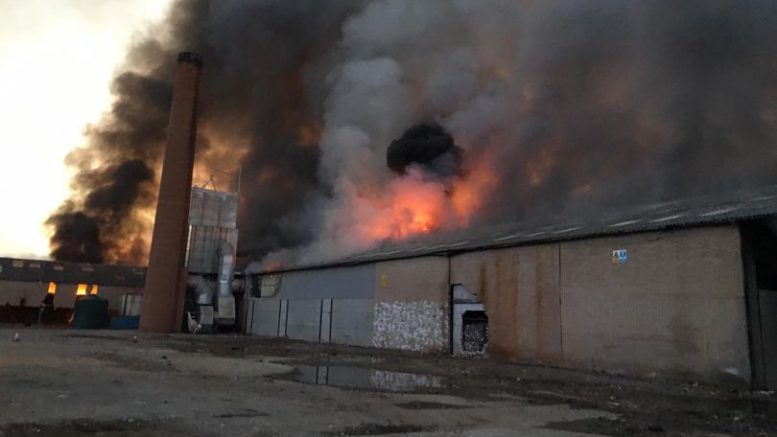 IT has emerged that a waste site which has been on fire for days was the subject of numerous complaints from residents in the area prior to the blaze.

The former Eldon Brickworks site, in Bishop Auckland, has been burning since Monday, August 31.

The fire has prompted councillors to call for a full review of waste sites across County Durham, declaring that more needs to be done to ensure potential fires are avoided in the future.

Cllr Mark Wilkes, Lib Dem shadow portfolio holder for neighbourhoods and climate change on Durham County Council, said: “It is very clear that the council has been aware of problems with this site for some time, and we have discovered that some conditions of the original planning application were not implemented.

“Given the public health impact of what has happened, I believe we need a full review of all waste sites across County Durham to make sure that they are safe for the environment, for local residents, and for those working at them.”

Cllr Garry Huntington, local member for Shildon and Dene Valley Division where Eldon is based, added: “This is the second time we have had an issue like this in the Shildon area, and it does seem as though local residents concerns are not taken seriously enough.

“Residents have been complaining for some time about flies and other concerns regarding the site.

“I echo my colleagues recommendation that a full review is required of these type of sites.

“We also need to be certain that the Environment Agency has the resources it needs to monitor these sites.”

The fire department continue their efforts alongside partners to manage a controlled burn and are mitigating risk to the public and the environment.

The cause remains unknown at this time, but the fire service is working with other authorities to delve deeper into how the blaze started.

Andrew Turner, area environment manager for the Environment Agency in the North-East, said: “We have visited the site a number of times over recent months as part of an ongoing investigation into its operation.

“In July we issued two regulatory enforcement notices which required the company to remove waste from outside of the building and create fire breaks to the waste inside the building.

“We’ve worked closely with our partners at County Durham and Darlington Fire and Rescue Service and Durham County Council to create a response plan which has been successfully implemented during this incident, reducing the impact on people and the environment.

“Our officers remain on site operating fast pumps and tanks to recycle firewater run-off and reduce the impact on nearby Dene Beck.”

Stuart Timmiss, head of housing and development at Durham County Council, said: “We can confirm that we were contacted by residents with concerns in relation to the site, including odours.

“In response we carried out a joint investigation with the Environment Agency, County Durham and Darlington Fire and Rescue Service and Durham Constabulary, as a result of which a series of notices were served in relation to the unauthorised use of the land for storage and importing of waste.

“We are continuing to work with other agencies following the fire that began at the site on Monday.

“There is no risk to the public, but we would remind all residents living nearby to keep their windows and doors closed and to avoid the immediate area.

“The site has been made safe and investigations into this incident are ongoing.”

She said: “People from Eldon started complaining to me about the amount of flies – it was like a swarm – and really bad smells.

“It shouldn’t have been there, and something should have been done about it a long time ago.”

Bishop Auckland Town Councillor Sam Zair said: “This is a warning to everyone of what can happen in our communities and the damage it can do to our environment.

“We have a duty of care to monitor all waste areas, and we must do whatever it takes to make our communities safe, as there will be no second chances.”

Falcons Management, the company which owns the site, revealed tonight that it is working with authorities to ensure the fire has minimal impact on the environment and nearby residents.

A spokesperson for the company said: “On Monday a fire started in our Eldon Resource Recovery Centre.

“Fortunately, a member of staff was able to raise the alarm promptly and the fire service has been on site dealing with the blaze from an early stage.

“We continue to assist the fire service and liaise with the Environment Agency and other stakeholders to ensure the fire is put out as soon as possible and with as minimal impact on the environment and local residents as is possible under the circumstances.

“We want to reassure our neighbours and any other local receptors that the affected material was non-hazardous municipal solid waste.

“It is our intention to remove all the fire damaged waste off site when it has cooled sufficiently, in consultation with all relevant authorities and in accordance with waste Duty of Care regulations.

“This incident has had a devastating effect on our business, and it is too early to say whether we have lost the main buildings on site or whether some of them can be saved.

“We will continue to keep all parties updated with events and progress on site as we know more.”