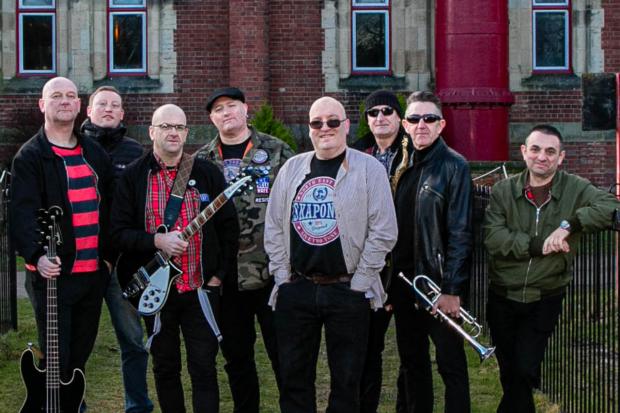 A DARLINGTON band is releasing a book this week about touring in the USA in 2019, the highs and lows of making music and how they have found success independently as a ‘do it yourself’ band.

The Skapones is a 2Tone ska band from Darlington and was formed in 2013.

The band has supported The Specials, Madness, The Beat and The Selector, to name a few.

Although the members have a soft spot for local venues including The Forum Music Studios in Darlington, the band has proved to be popular further afield, and has performed in cities including; Los Angeles, New York, Chicago and Baltimore.

Seemingly on a different planet to their hometown of Darlington, the band played at the renowned music venue, Whisky A Go Go on Sunset Boulevard in West Hollywood.

By ordering directly from the website, theskapones.co.uk, however, a free live mini album ‘Still A-live’ will be included.

Paul Williams, lead vocalist and author of the book, said: “The book is all about supporting The Specials on their 40th anniversary tour and touring the States. It was just an amazing year, 2019.

“We had such a good year in 2019 for a band that literally does everything itself. We don’t have a manager, we have our own label, produce our own merchandise and records, without any backing. We do the lot.

“Originally, the idea of the US tour started out from a little grainy video filmed on a mobile phone from a live music night at a pub in Middlesbrough and this was put on Facebook and this American guy commented something like ‘nobody plays that kind of ska over here’ and the seeds were sown and it all snowballed from there really.

“I did think to myself, this is stupid, it’ll never happen, and then somehow we managed to pull it off. We were completely running on adrenaline.”

Read more: Darlington peace vigil to be held this week in support of Ukraine

Paul isn’t new to writing books. In 2009 he wrote ‘You’re Wondering Now: The Specials – From Conception to Reunion’ as he is such a big fan of the band.

The Specials clearly liked Paul’s work because the forward for ‘The Skapones – Way Out West: 2019, The Specials & Stuff’ features a forward by The Specials’ Horace Panter.

The Skapones – Way Out West: 2019, The Specials & Stuff’ is available from The Skapones’ website. Picture: PAUL WILLIAMS

More recent success for The Skapones includes being featured on a double vinyl album released in the States called Ska Cares, with all proceeds raised from it going to the Alpha Boys school in Jamaica.

The Skapones will be at Black Slab in Redcar on Sunday March 13 for a book signing.

You can also follow our dedicated Darlington Facebook page for all the latest in the area by clicking here.