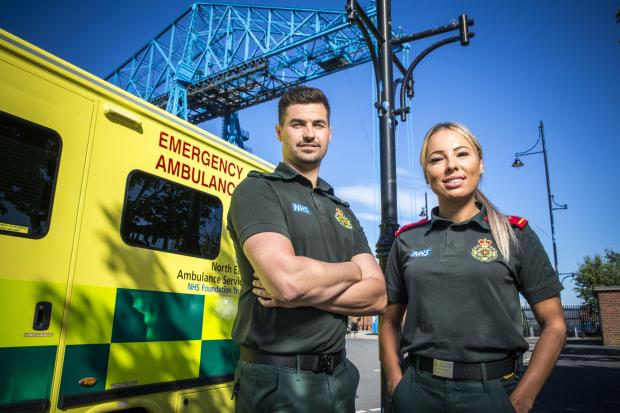 Now on its ninth series, the team from production company Dragonfly were embedded with NEAS to film footage for the BBC’s BAFTA-award winning series between January and April this year.

At a time when the ambulance service has never been more under pressure, the series follows crews across Tyne and Wear, Durham and Darlington and Teesside.

Each of the 12 60-minute episodes for the upcoming series will feature the work of ambulance staff and the patients they treat during one particular shift, following them in real time alongside their colleagues in the Emergency Operations Centre where decisions are made in a highly pressurised environment.

Throughout the series, The Northern Echo will be profiling some of the people featuring in the series who are doing such a wonderful job on the front line.

Former mechanic Chris Dundas-Twizell was inspired to join the ambulance service after his wife Jemma died at the age of 36 after being diagnosed with cervical cancer.

The 30-year-old is originally from Bedlington in Northumberland but moved to County Durham seven years ago. He joined NEAS in January 2021 and when he’s not at work, you’ll find him paddle boarding or travelling.

Q. What attracted you to the job?

A. I lost my wife Jemma to cervical cancer when she was only 36 years old, this pushed me into wanting to change careers and train to be a paramedic and my way into doing that was to joining NEAS as a clinical care assistant.

Q. What brings you to work every day?

A. The chance to make a difference, whether that is big or small. I like the variety of the job, it is never the same, it is far from a normal 9-5 as you never know what or where you will be sent next. It can be a difficult job to do, but we wouldn’t do it if we didn’t love it.

I also love the camaraderie – we might come across Yorkshire Ambulance Service crews at hospital, we don’t know them but we wear the same uniform and talk to each other like colleagues, I’ve never had that in any other job.

A. An average shift consists of a lot of talking, a lot carrying and a lot of coffee to keep you going.

Q. What skills do you think people need to be able to do your job?

A. You need to be committed, caring and honest; communication skills are also very important – if you can’t talk the back legs off a donkey it’s not going to work!

Q. It can be a traumatic job at times, how do you look after yourself and what support do you get?

A. It can be a traumatic a times and you can see some very unpleasant things. It is important to talk about it when it starts to get too much, we all support each other and help each other out. At the end of the day ambulance staff aren’t super-human, we are just regular people.

Q. What has it been like working through the pandemic?

A. I started during the pandemic so I know no difference. I don’t know what it was like beforehand.

Q. Where do you see your career heading?

A. My goal is to become a paramedic and help further my ability to care for people in need.

Q. How do you feel about being part of the BBC Ambulance show?

A. Being involved in the show was fantastic experience, I would do it all over again if I could. I was a bit nervous about the cameras at first but at the end of the day we’ve got a job to do so I just got on with it, and we had a fantastic cameraman called John who became part of the crew and after that first shift we actually forgot the cameras were there. I feel very proud of being a part of it.

Q. Your first episode made us quite emotional. Can you talk to us about that?

A. The patient had said he had lost his wife and me and Becca were talking about it afterwards. We didn’t actually realise John was filming us at the point that we were talking, but I’m quite open about losing Jemma and she didn’t have a smear test for 10 years so I’m quite passionate about it.

Q. What impact do you hope the series will have in the North East?

A. Hopefully it will allow the public to see a glimpse of what it is like to apart of the ambulance service on a day-to-day basis.

Q. What do you love about the North East?

A. In the North East people are very friendly, I’ve never had the same feel anywhere else, that togetherness. I’m a Newcastle United fan (but with the job I don’t get to watch them that much these days) and love a Greggs steak bake!

Read more: New owner for Bishop Auckland shopping centre – and it might surprise you

More than 200 people were part of this series, either in front of the camera or working behind the scenes to support the Dragonfly team.

NEAS employs more than 2,900 people and covers 3,200 square miles across the North East region, serving a population of 2.7 million people by handling all NHS 111 and 999 calls for the region, operating patient transport and ambulance response services, delivering training for communities and commercial audiences and providing medical support cover at events.

It has three emergency operation centres based in Newcastle, Hebburn and Wynyard and operates 175 double crewed vehicles and 220 patient transport vehicles as well as 45 rapid response cars, a fleet of support vehicles including driver training and specialist vehicles for the Hazardous Area Response Team.

NEAS Chief Executive Helen Ray said: “The programme really shows how amazing our teams are in their care and treatment of patients. It highlights the dedication and commitment from every member of team NEAS as they strive to give the best quality care to every patient they meet. I’m incredibly proud of them all and would like to thank them for representing our service so well.

“Each episode shines a light on the wide range of patient needs faced by our service – whether that be emergency response for life threatening illness, support for mental health or social care needs, or alcohol and drug use. It shows clearly the pressure faced by our service and the wider health network around us, and the dedication of our brilliant staff to do their best.

“I hope this series of Ambulance also serves to inspire and encourage people to consider joining our service. Working for the ambulance service is so much more than a job, it’s a chance to really make a difference.

“It was a real pleasure to welcome the Dragonfly team and they were fantastic to work with.”

If you want to read more great stories, why not subscribe to your Northern Echo for as little as £1.25 a week. Click here