LOGANAIR has secured deals with some of the world’s biggest airlines, including British Airways and Emirates, to provide seamless international travel for travellers from the region.

The partnerships have been unveiled as the operator today announces a new route between Teesside International Airport and London Heathrow from March 8. It is initially planned to operate twice a day Monday to Friday with a single flight on Sundays.

From March 28, weekend services will increase to one morning flight on Saturdays and two on Sundays.

Loganair, which has named one of its 48-seater jets the Spirit of Teesside, has also secured partnerships with KLM, Air France, Emirates, Turkish Airlines, United Airlines and Qatar Airways.

The new agreements will mean passengers will be able to travel on one ticket for their entire international journey, via Heathrow, and have the benefits and reassurance of through check-in and through luggage to their final destination, along with protected connections in the event of delays.

Weekdays see departures from Teesside for the 1 hour 15minute flight at 06.50 and 17.55, with return journeys from Heathrow at 08.50 and 19.50. These times give business customers the option of a full working day at either destination as well as optimum timings for leisure travellers, when national restrictions permit such travel.

Tickets start at £69.99 one way including all taxes, and are on sale from today.

This latest launch builds on a partnership between Loganair and Teesside International announced in mid-November, which saw the Glasgow-based airline return to Teesside under its new ownership after an absence of two and a half years.

Then it was announced that flights from Teesside to Aberdeen and Belfast City will operate from the start of February 2021, with Dublin, Jersey and Newquay flights set to begin in summer 2021.

Tees Valley Mayor Ben Houchen said: “Securing flights into the capital with Loganair is another feather in our airport’s cap.

“The fact that in the next few days you will be able to go on to the websites of the likes of British Airways, Qatar and United Airlines and book flights from Teesside to hundreds of destinations across the globe shows just how far we’ve come since taking the airport back into public ownership and saving it from closure less than two years ago.

“The team is working tirelessly behind the scenes to bring back new bars, restaurants, duty free and a better customer experience with brand new security features, scanners and more check-in desks to manage the increasing number of passengers we’re expecting once we get through this pandemic.

“We look forward to welcoming people from across Teesside, the North East and North Yorkshire back through our great airport when restrictions allow and it is safe to do so.”

Loganair chief executive Jonathan Hinkles said: “We understand the uncertainty around travel right now and are therefore pleased to be able to look towards the future by providing what Teesside International will need as and when lockdown restrictions begin to ease.

“We’re very happy to be returning to Teesside International, and we are back for good. We look forward to working with the team at the airport and the Tees Valley Mayor and Combined Authority.

“There’s no doubt that air travel is having a difficult time right now, but I’m confident that our plans for Teesside International are both viable, appropriate and flexible now and for the longer term.” 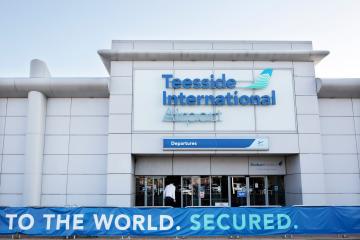 A CLEVELAND Police officer was caught on camera urinating on the street. The Northern Echo | Teesside …

A HEAVILY intoxicated man who attempted to drive off in van with a terrified teenage girl in the passenger seat didn’t get far when he failed to take the handbrake off. The Northern Echo | Teesside …

A FISHERMAN was rescued from the sea by his skipper after falling overboard three miles off the coast at Hartlepool. The Northern Echo | Teesside …

MORE than five years after being left to rot, the former headquarters of steelworking in Teesside has been frozen in time. The Northern Echo | Teesside …

A DRUG dealer who stashed thousands of pounds of cannabis at his friend’s house has landed them both in court. The Northern Echo | Teesside …