A HEROIN dealer made an audacious attempt to escape custody after he launched himself at the secure screens when he was jailed for 25 months.

Joseph Smithson reacted angrily to his sentence and tried to climb out of the dock before security staff managed to restrain him.

The 30-year-old clattered against the glass in the courtroom as his shortlived bid for freedom came to an abrupt end.

Teesside Crown Court had heard how Cleveland Police raided the home Smithson shared with his parents and younger brother on September 26, 2019.

Officers discovered 25 wraps of heroin, weighing almost 16g and estimated to be worth up to £810.

There was also £320 in cash discovered and a forensic search of his mobile phone revealed a number of messages associated with drug-dealing and his customers.

The court heard Smithson was addicted to the class A drug and was dealing it to pay off drug debts.

Smithson, of Pentland Avenue in Billingham, pleaded guilty to possession with intent to supply heroin.

The court heard the 30-year-old was “determined to make changes to his life” and was already working towards reducing his drug use.

The defendant was supported during the court hearing by his mother, who he helped to look after on a daily basis due to her ill health.

Judge Ian Mullarkey said he accepted Smithson had expressed remorse and there was issues around “vulnerability”.

But he also added that he had been keeping the drugs at his family’s home and in the presence of his younger brother.

He sentenced him to two years and one month in custody.

And it was as the judged told Smithson of his fate that he attempted to flee the court building.

Staff made a call for extra security to attend the courtroom but Smithson’s bid for freedom was blocked by security glass and dock officers. 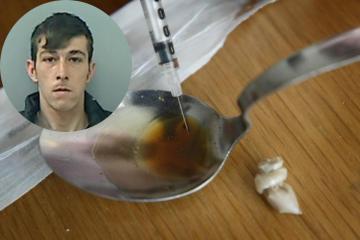 AN expanding North-East education trust says it has been “strengthened and enriched” after adding a high-performing school to its portfolio. The Northern Echo | Teesside …

MURDER detectives say a former Darlington man whose body was found in woodland this week may have been killed several weeks ago. The Northern Echo | Teesside …

A COUPLE have been applauded by the Prime Minister for raising nearly £400,000 through their charity efforts. The Northern Echo | Teesside …

Police are appealing for help in tracing a teenager who has gone missing from his home in Stockton. The Northern Echo | Teesside …

A TOP health official says a Teesside trust has a “long way to go” to upgrade facilities and recover from years of cash struggles. The Northern Echo | Teesside …