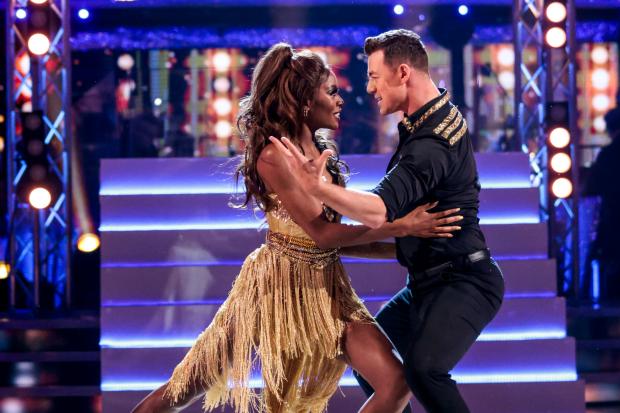 The Strictly star has also revealed that she feels “completely liberated” after taking part in the hit BBC show.

The TV presenter, 33, has said that the programme has allowed her to show the more vulnerable sides of her personality as well as be her “unapologetic self”.

Odudu is partnered with Strictly professional dancer Kai Widdrington and has been one of this season’s strongest performers.

On Saturday night’s semi final, the pair scored their first perfect 40 for their QuickStep to “Sing, Sing, Sing”.

They also scored an impressive 39 out of 40 for their Rumba which brought them to joint first place on the leaderboard with Rose and Giovanni.

The Married at First Sight: Afters presenter has admitted that learning how to express her emotions through dance has been “life-changing”.

There has been wide speculation that a romance has been brewing between her and her partner Kai.

Finally Craig pulls out that 10 paddle and AJ and Kai get their first perfect #Strictly score! @AJOdudu @Kaiwidd pic.twitter.com/bNvAX52ZHL

Odudu addressed the rumours, saying that it was “lovely” that the public is so invested in their partnership.

“I think it’s so lovely that everyone is so invested in our relationship,” She said.

“I think this goes to show how we are clearly getting on really well. But, obviously, we just really want everyone to focus on what we’re doing on the dancefloor.”

Widdrington agreed and added that if their performance looks more than friendship then they are doing their job correctly because that is “how the dance is supposed to be”.

Odudu then joked that she could now use her new moves if she saw an attractive man on the dancefloor, adding: “I think dancing is so joyous and so beautiful, and I can’t wait to show off these dance moves at Christmas, and birthdays, weddings. I’m ready to clear dancefloors across the UK.”

The pair also said that they were “excited” to have gotten this far in the competition ahead of their semi-final appearance.

The couple then admitted that they will miss spending time together as well as with the whole Strictly cast.

A dance as dazzling as that dress, AJ and Kai’s Quickstep makes us want to Sing, Sing, Sing 🤩 #Strictly@AJOdudu @Kaiwidd pic.twitter.com/7msygdXXnw

They are insisted that they will remain close once the show is over.

Widdrington added: “I think after spending this long with someone, of course, you have to stay in contact, it would be weird unless you really hated each other – which we don’t – we get on like a house on fire, so of course we’re going to see each other.”

Reflecting on her experience, the 33-year old said:“I do definitely feel empowered by the show, I’m completely liberated.

“There are so many little things as well in television that I think subconsciously I’ve not even realised about myself, even the confidence to go on TV in front of millions of people without a face of make-up on, that’s been quite a thing.

“Showing different sides of my personality, being my complete unapologetic self, has been quite liberating because, I guess, it’s not something that I do naturally, like go on TV and cry, I’m always usually bubbly and bouncy.

“So, just to show myself, and be accepted for me being myself, has been really amazing.”

Odudu added: “Then, obviously, Kai teaching me how to use my body and express my emotions through dance has been literally life-changing.”

The Strictly Come Dancing Results show will air on BBC One at 720pm on Sunday December 12.