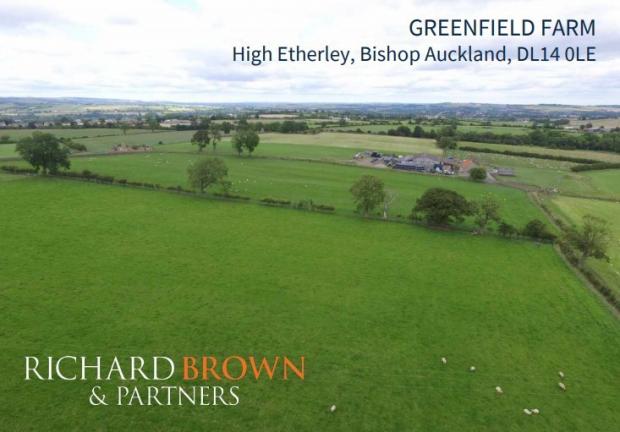 A £1m farm in south Durham is up for sale. Along with 60-plus hectares of grassland comes a unique stretch of railway history

The reason for the views that will cost a purchaser more than £1m is that Greenfield sits near the top of Etherley bank, and the farmhouse was already standing in 1825 when the Stockton & Darlington Railway first hauled coal over the Etherley summit.

The trackbed of the railway is now a public footpath that runs inside the farm’s eastern boundary, and the sales brochure also notes the existence of a small paddock which, it says, has a grade II listing and is known as the “Engine Pond”. Today the pond is a little overgrown with trees sprouting from its sides and mossy mounds revealing glimpses of long forgotten stonework, but these are the last remains of the enginehouse which hauled the coal wagons over the Etherley summit.

David Shevels took this picture of A4 Dwight D Eisenhower pulling a diverted express through Shildon tunnel on June 17, 1962. “I was using my dad’s box camera, and head-on pictures were usually okay with a shutter speed of 1/30th of a second,” he says

For surveyor George Stephenson and the Darlington entrepreneurs behind the railway, the bank at Etherley was one of the major obstacles in getting coal from the south Durham mines to the sea at Stockton from where it could be lucratively sailed to market.

Stephenson overcame the obstacle by placing a stationary steam engine on the summit at 646ft above sea level, and creating sloping tracks on either side leading up to it.

George Stephenson decided to take the railway over the hills of south Durham, rather than go round them as previous surveyors had suggested. This meant he needed engines on the summits of Etherley and Brusselton to pull the coal over the top

The latest earth-moving technology was brought in to create the slopes. “The earth waggons in use were mechanical monstrosities, square squat things,” recalled The Northern Echo in 1875. “Some of them had been brought from Hetton, where Stephenson had employed them in the construction of that railway.

“They were as good as any in the district; but they were very bad for all that. They were not only clumsy; they were barbarous, shearing off many a finger.”

Yet the earthworks at Etherley were considered one of the engineering marvels of the day. One embankment was 40ft high, and people came to gawp at man’s ability to shift so much earth with such clever machines.

The Etherley engineman’s house, shortly before it was demolished in the late 1970s. Picture from the John Proud Archive, courtesy of Win Proud

In the enginehouse on the summit, Stephenson placed a 30hp steam-powered engine – it is the reservoir that provided water for the engine’s boiler that is called the Engine Pond on the sales details.

The engine turned a large drum which coiled and uncoiled a rope to which a string of coal trucks was attached. When the engine started, it pulled the wagons 1,109 yards up the north side of the incline and then lowered them 2,195 yards down to the River Gaunless at St Helen Auckland.

But not always safely.

In the early days the wagons “ran violently down the incline, smashing themselves and those at the foot to fragments and scattering their contents in all directions”. These disasters were so serious that they threatened the viability of the railway, but in 1826, Timothy Hackworth reconfigured the engine so that it worked more successfully.

A road bridge at Low Etherley looking up the northern incline towards the enginehouse on the summit – the chimney can just be seen under the arch. Today, the bridge is submerged beneath the B6282 from Etherley into Bishop Auckland

Hackworth was assisted by the engineman who lived in a house next to the reservoir at the summit. The first Etherley engineman was Thomas Greener, who was born into a mining family at Killingworth but went to sea for 14 years. He was friendly with Stephenson, who lived at Killingworth and recruited him for the S&DR project.

Under Greener, the Etherley engine, like the earthworks around it, became something of a tourist attraction. One account says: “This beautiful engine was often visited by ladies and gentlemen in the neighbourhood, who mostly expressed their great satisfaction at this masterpiece of human skill, and the interesting conversation of the engineer.”

Greener stayed until 1827, when his wife died and Stephenson recruited him to help build the Liverpool & Manchester Railway – Greener took the line over the notoriously boggy Chat Moss and finished his career as a steam brewery engineer in London.

At Etherley, Greener was replaced by his brother, John, who moved into the house on the summit with his family. John was a devout Methodist, and was present at the opening of a Wesleyan chapel in Toft Hill in 1829 where he was Sunday School Superintendent, with four of his own children in his class.

Sadly, though, his wife, Elizabeth, died on November 14, 1833, two days before the christening of their new daughter.

And John himself died an untimely death – killed by his own engine at the Etherley summit at about 8am on February 20, 1843.

An 1875 painting of the Etherley enginehouse, although it had been disused since 1843 – a wall appears to have been built across the tracks in front of the house

The Northern Echo’s sister paper, the Durham County Advertiser, reported: “He was on the top of a ladder, dressing the engine, when the ladder slipped, and the unfortunate man fell into the engine, which was going at the time. When taken out, he was dead. A coroner’s inquest was held, and a verdict returned of accidental death.”

He was 53, and was buried beside his wife in the churchyard of St Helen Auckland – their headstone can still be found bearing the legend: “The Memory of the Just is blessed.”

In the early years of the Stockton & Darlington Railway, technology was improving at a rapid rate, and by the time of John’s death, only 18 years after the railway had opened, the Etherley stationary engine was dreadfully outdated.

On January 10, 1842, amid great fanfare, the Shildon Tunnel had opened. It was the new great engineering wonder of the day, 1,225 yards long, 120ft beneath the town, made of seven million bricks and the only tunnel in Durham.

It enabled steam locomotives to pull their wagons of coal under the mountain rather than have the Etherley engine pfaff about and pull the wagons up one side of the mountain and lower them down the other.

After John’s death, the Etherley engine worked no more.

It was sold in 1859, and the rails had been lifted by the end of the 19th Century. The engineman’s house remained as railwaymen’s accommodation into the 20th Century but then fellow derelict, and was demolished in the late 1970s.

Now all that remains from the dawn of the railway age is the trackbed and the Engine Pond, which are for sale with Greenfield Farm. There are two lots: the farmhouse, which was standing when the railway was built, and 45 hectares for £925,000 and 17 hectares of grassland closest to Etherley and including the railway relics, for £250,000.

The Friends of the Stockton & Darlington Railway, a volunteer group which promotes the heritage of the entire line, is encouraging local authorities to take the trackbed and the pond back into public ownership. Although there is no threat to the footpath along the trackbed, so much more could be done to open it up and explain its history ahead of the 200th anniversary in 2025.

There are ambitions to create a walkway and cyclepath along the length of the line so perhaps a little engine could once again be placed by the reservoir on Etherley summit to haul out-of-puff bicyclists up the 326ft rise from West Auckland and lower them gently down the other side, as was done in the old days.